The day I was out walking with tamile and we started talking a little bit about what exactly food is to us and how we see it.  One of the things the we realized as we talked was that we both see food as a reward.  In seconds as we talked both of us rattled off a number of examples where we rewarded ourselves with food for a job well done.
I'm pretty sure that you get the idea. Not really sure what the origin of this behaviour is but it seems  to be pretty consistent across most of the people I know.   More then once I've seen a coach with the whole sports team out for Slurpees or Ice Cream. 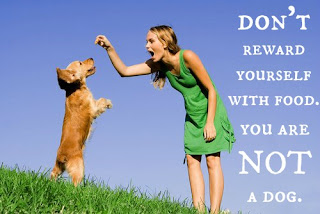 We need to get away from this.  Why should food be used as a reward?  I guess in a lot of ways it is just easy.  Food is everywhere so that makes it super easy to get and give as a reward. With a little extra effort a better reward shouldn't be to hard to come up with.

Anyways hopefully this will at least give you something to think about.

I was going to say that I hoped this post gave you some "Food for Thought" but I thought better of it.

There is a quote I found that is apparently attributed to Drew Carey;