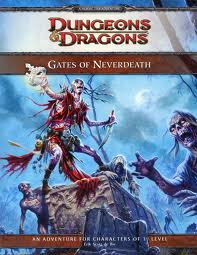 This Saturday I was one of the two DMs at Pendragon Games and Hobbies for the World Wide Games day.  We had 14 people come out.  One had intended to just watch but with a bit of peer pressure from me and his friends we got the guy tossing dice.  So it worked out to be two tables of seven, not ideal but we two of the regular DMs are at Gen-con (lucky bastards) you make do.  If you haven't played this yet and plan to in the new future you might want to skip this post for now.  I'll try not to give away to much but you might get some information you don't want from reading it as a player.

At one table was a group of friends who had all arrived together with one extra player. This group was mostly adults as well so rather then splitting them up I took the group of kids who had shown up and a couple my regular players. Now it is important to me that I note here that I normally run the adults table.  Not that I have anything against kids.  In fact I have two daughters and a grandson. It's just been a long time since I've had kids at my table, either way I've done my time and look forward to my regular group on wednesday. 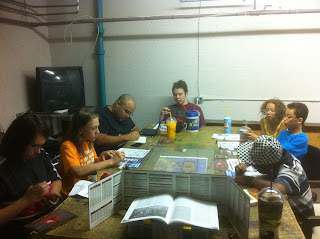 The session was intended to start with thirty minutes of character.  To my surprise the kids already had characters. The oldest among them had built everyone characters, the down side to this was that he had done it for them.  So instead the thirty minutes was taken up with explaining the various powers to them and making sure they noted what they could do.  Honesty I am eternally grateful that they had characters already I don't think we could have pulled it off if they hadn't. There just wouldn't have been enough time.
We got the game started with everyone reading off there backgrounds from the bags.  It took a bit of card swapping but it all worked out in the end.  The bags where a really great idea. My experienced players liked the roleplaying benefits of them. As well as the in game benefit as well.  Although the only power that was used during the game was the Harper's Pin. 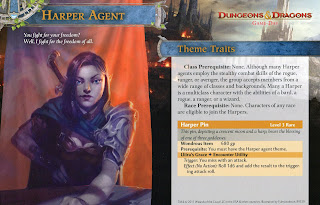 The group took on the assignment of bodyguard with little to no question. No one showed to much interest in what/who they were protecting or why. The only thing anyone wanted to do was to buy a Potion of Healing with their new found money. This came in very handy during the final encounter.  So once that was done we got on with the first encounter. To account for the additional players I added an extra wave of skeleton in round three, and two additional Zombies.
Undead swarmed up on to the deck of the ship and keep many of the characters busy.  There ability to shift and attack allowed the undead a lot of freedom of movement.  Unfortunately it also pinned down the players so there wasn't a lot of movement on there part.  From the shore the archer fired from behind a cart and then hide after each shot.  None of the players ever got close enough to spot him, let alone attack him.

The biggest challenge of the encounter was drawing the characters away from Seldra long enough to hit her and steal the crown.  In the end I pulled one of the zombies back and bull rushed with a skeleton to get her into a good position.  In the end this worked out alright.  Oddly enough the only person to notice anything happening was the pre-gen druid's spirit animal.  The encounter ended at the end of the turn with the undead dropping back into the water and being struck down.. 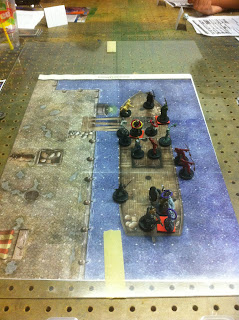 To my surprise this was the moment that the PC's decided it would be a good time to renegotiation their pay.  One of the youngest at the table argued that since they had arrived there job was done.  They ended up negotiating a pay increase of a 100 gold.  A natural 20 goes a long way in a diplomacy roll.

The skill challenge of the session came next and it moved along fairly quickly.  I started it off with an Athletics challenge for everyone at the table.  Only one succeeded out of the seven players, six healing surges eaten.  After I let the players suggest skills that they wanted to try.  That lead basically no where, the younger players just weren't comfortable enough with the characters or what they could do.  So in turn I started making suggestions and telling the story of what was happening based on their rolls. It worked really well and the kids where smiling.  Although I think I might have scared/mortified the young girl at the end of the table when I described how she Intimidated information out of someone.  I don't think she knew what the word meant until I explained it after-wards.  This type of story telling worked really well and kept everyone interested.  The group scored two failures really fast and then followed it up with 3 successes.  It could have gone either way, but in the end they failed the final challenge.

The final encounter brought us to the Neverdeath grave yard.  Tolivast was waiting and ready for them. His work on the crown complete he called forth his hounds and zombies and prepared to take on the party.  The hounds struck first darting in to various points among the party and biting down on a PC, those who hit shifted out of harms way and avoided clumping together.  Tolivast acted before the PC's could move and called forth skeletal hands that grabbed and clawed at them pc's, It wasn't a good start for the players But they got back into the game quickly

Ash zombies at the back of the group where the first to feel the party's blade.  There bloodied effect came as quiet the surprise to the players.  Over the combat was great and really well balanced.  Honestly it could have gone either way.  At one point I was fairly worried I had a TPK on my hands.  While none of the monsters were overly powerful worked very well together.  The combination of the Ash Zombies ability to prevent healing surges from being used and Tolivast aura along with his teleportation were absolutely deadly.  Of course his ability to attack and pull people into the aura equally deadly and responsible for at least one character falling. 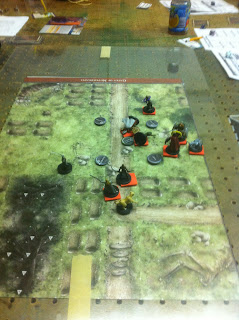 The battle is nearly over, on the right side of the map Tolivast and his last hound
are both already bloody.  But then again so are most of the PCs

In the end PC eliminated  Tolivast support and then those still standing were able to get out of the his aura's affect and then hammered him with ranged attacks.  Seldra came in grabbed the crown and disappeared into the crowd before the watch arrived. We skipped the final skill challenge, due to time.

All in all it was a great session.  My thanks to Pierre and Reid for their patience.  It was a long day, working with inexperienced players.  I'm thinking at some point down the road I might run NewbieDMs game system RPGkids for all the new players.  Hopefully it will give them all a better feel what gaming is all about.  I know a couple of them are also just the right age for it as well.

Well that about sums up World Wide Games day report, now on to update Lost Crowd of Neverwinter to a level three adventure.

Would you be able to send me a copy of the adventure now it's over and done ? Or direct me to where I could get a copy ? I'm interested in the setting but don't actually play much.

Sadly no I don't have copies of the adventure I can just send out or anything that. If you talk to you local brick and mortar story they likely would be very interested in having you DM for them.