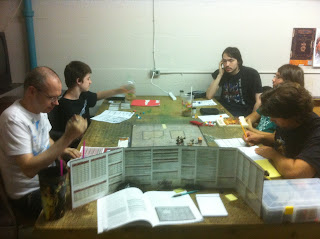 Things started off a little rocky two of my regular players texted me and let me know that they wouldn't be able to make it.  Hopefully they will both be back next week.  I end up with 1 of my long time players, 3 regular encounter players who just normally play at a different table, and one player who was an experienced gamer who is still new to 4E.  This was his second encounter session.
None of the players had a copy of the Neverwinter campaign setting so I quickly read of the description of the background themes.  Three of the five players grabbed a theme and two didn't bother.  I think in the long term they will be kicking themselves for that decision.
I laid out the map and set up a few 3D paper fold items I have to set the scene.  Rather then clutter up the board with a ton of extra townsfolk minis I used the PC tokens for them.  I also used minion token for the shop owners. Then we rolled initiative to give everyone an order to act in.
With the theme I really stressed the newness of the area of town they were in.  As well as the disrepair of everywhere else.  I also stressed the marketplace as being both a market and a place to escape the hard that everyone was doing as part of the effort to rebuild the town.
The characters went around and did a bit of shopping.  Those who had played through the Gates of Neverdeath had gold burning a hole in their pouches.  A couple of the players worked hard to help repair the supply cart, and never asked for anything in return.  Another character paid double for a portion of healing.  This is a dangerous city after all, and the merchant liked to keep them for himself. 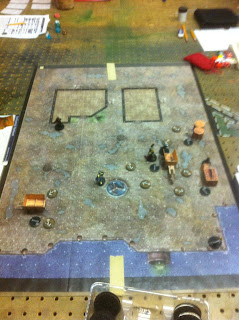 Our Heir of Delzoun meeting the armour, who it turned out was also an heir of Delzoun, and shared a bit of information.  Then offered to spend some time working with him and help him with his stall.  It was a great exchange and a new friendship born.  I hope the player remembers it and it comes back up in the game later.
My favorite role-playing encounter came when the Drow Hunter went and spoke with the half-Orc weapon merchant.  He wanted a new bow and got all offended when Nagda suggested that he check with the toy vendor down the pier and that she only dealt in true weapons, not children's toys.  By the end of the roleplaying portion of the evening everyone had at least one interesting exchange or two.
After about an hour or so I could see that some of the players were starting to slow down and it was time to move on.  I read out the next section of flavor text and deployed the minis.  The new 4E player was ready to cut and run when he saw the number of them.  Then another player explained the concept of minions.  I of course refused to admit if there were any minions on the field.  Encouraging them instead to man up and attack to find out.
The combat moved swiftly Locke the halfling thief hid in the fountain and used his sling to great effect.  The plaguechanged skeletons rushed and attacked pc's, that were in reach, and towns folk when they couldn't. A couple of towns folk dropped and some minor damage was done to the PCs.
The players fought back ignoring the downed townsfolk.  In using the PC tokens I was able to just flip them over to bloodied.  Clorde jumped into his cart drove away. However because of the placement of the guard drakes he had to go the opposite direction.
The Eat This twitter effect went off and kept a drake pinned down.  Then the next round the kicked off and the PCs kept making short work of the plaguechanged skeletons.  However the drakes on the other hand were all hitting the characters hard. By the end of the round all but two of the original plaguechanged skeletons were down, but the start of the third round fixed that. 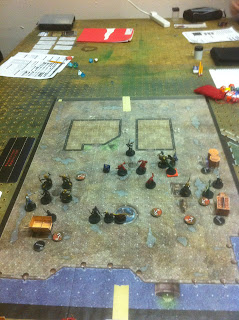 More climbed up out of the sewers and to the fortune a PC was in striking distance and so was the last remaining towns person.  The townsfolk was dropped, while PCs armor saved him.  It was that moment that the Heir stepped out from between the buildings and with flash of his sword he dropped two skeletons.  By the end of the round it was mostly a clean up operation for the party.  Only the Drow hunter was in any real danger.  The poor guy had been bloodied so many times his party was tired of healing him and he was now hovering at 2 HP.
The heir opened up the forth round and I might have put a bit to much description in to his actions.  One of the players commented "ok, we get it!  This guy is awesome.". With some good teamwork the PCs dropped the remaining drake.  They had pinned the poor then and immobilized it might have had a chance if someone else was rolling the saving throws.
The last beast fell and the townsfolk cheered their returned king.  Apparently the party's contribution wasn't worth cheering or it was completely forgotten. Being a man of the people he waved them away and pointed to the sky.  The battle wasn't done just yet, and the White Dragon arrived.  I ended the encounter and reminded the players to note what powers they had used and where they stood for hit points.  At this point I've left them with the impression that they won't be getting a short rest before they have to deal with the dragon.
Be back in a week, hopefully this report gives other DM's ideas.


-------------- Edit ---------------
Given's comment reminded me of something that I had forgotten to include in the post.  When there was only a single monster left on the battlefield. Two of the characters broke away from combat to rush over and help downed townsfolk.  In the end the party was able to save 3 of the townsfolk, while a fighter type went over and finished off the monster.  Sorry I forgot to include this in my original post.
at 22:31

Sounds like your table had a lot of fun!

You keep a very clean and orderly table--mine is crowded mess--some of the players barely have room for dice. I can loearn a lot from you on this.

> With the theme I really stressed the newness of the area of town they were in.
Awesome. I mentioned lots of out of town Yuppie types, Gaurds who were rude/disrespectful, and the new construction all not really fitting in well with the existing Neverwinter beauty. But the newness is really good idea that I will be stealing!

> The players fought back ignoring the downed townsfolk.
My players did this as well--not one heal check. I will make them pay for that next week.

Great blog post, I hope you keep up the great work!

Thanks for the feedback and the comment. I like the idea of the guards being gruff, rude, and disrespectful it is something I will have to include in future sessions.

You comment about the towns folk reminded me of something I'd left out. I've updated the original blog to correct this.