This will be the last Friday Flash I'll be posting to this site. Any future posts about writing will now appear at http://betweentheclicks.podbean.com Some of the facts in the story are true and the pictures included are taken from my work place. 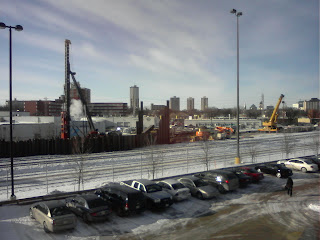 Thump, Thump, Thump… The dull sound of a heavy metal weight as it banged against steal to drive it into the earth reverberated out through the neighbourhood. That was the sound he woke to everyday for the past month. Alex gave the alarm clock a side long glance and confirmed his fear, right on time, 7am every morning. He buried his face in the spare pillow and screamed “FUCK!”

Alex rolled out of bed with a scowl on his face there was no getting the day off to a good start anymore. He threw back the curtain and looked down at the heavy machines behind his house. The men wandered around in their neon vest and hard hats without a care in the world. There was no sense of rush, no apparent desire to be finished anytime soon.

His home had gradually gotten messier over the course of the last month. The bedroom was littered with piles of clothes scattered on the floor. What he needed for work was folded on top of a pile he grabbed it and left the bedroom. His steps fell into rhythm with the impacts from outside.

Before he turned into the kitchen he heard a crash and the follow up sound of pieces as they scattered across the tiled floor. He stopped in the doorway and looked in. The floor was covered in tiny fragments of his favorite coffee mug. Another impact and all the dishware in the cupboard bounced a millimeter into the air and landed a little bit closer to the edge. Alex slammed the cupboard shut with a groan.

He couldn’t be bothered clear up the broken mug he just wanted it all to stop. A minute or so later he was dressed and out of the apartment. Outside was the worst there was nothing to dampen the sound and it just echoed through the apartment block canyons.

In the gas station at the end of the block he poured his coffee into a paper cup and walked up to the counter. He set the cup down on the counter and stared at the cigarettes racks. His mind wrestled with decision for long seconds. A man behind him called out irritable “Hurry up already.” Even the clerk tapped his foot as he waited.

“4 months down the fucking tubes, Players regular and matches.” He shoved a fist full of money towards the clerk, snatched the merchandise up and stormed out of the store.

Outside he tore into the pack and looked out on the construction. A wall section, 5 feet wide and 30 feet long, was slowly pounded into the ground. The whole wall stretched out into the horizon, along side of the train tracks. Each steel section insert to a different depths. According to the papers it was meant to dampen sound from the new transit corridor. Alex pulled out a smoke lit it, inhaled, and then coughed like a first time smoker.

The whole situation would have been much easier to handle if his office hadn’t been only a block past the tracks. It was a slow painful walk as he watched each impact drive the sections another couple of inches deeper. At the office the day only got worse when each impact caused his monitor to dance across the CPU like dishes in the cupboard. Smoking was the only thing that had gotten easier.

By the end of the day things had changed. Its pitch was very different and there was a bit of an echo now. He’d never heard it like this at all. By the fence that he could see what was going on he was right at the fence. A new attachment was hooked to the crane and it pulled upward to lift the sections up and out of the ground. “What the fuck?” he said aloud as he stared at the sight in disbelieve.

A nearby construction worker must have heard and answered “Pretty screwed up huh? Apparently the surveyor missed the mark and we’ve been driven this thing four feet off the mark. We’ve gotta start all over. It will be all over the news tonight.”

Alex dropped to his knees and cried. The only thing that kept the man alive was the chain link fence and the fact that he hurried back to work before Alex had gotten back up. He stood up and jumped on to the next bus that went by. Thirty minutes later he had silence for the first time in weeks.


The library offered bliss until everyone was kicked out and the doors locked. Half an hour later he was at the bus stop again. An unlit cigarette hung from between his lips as he looked out the empty construction site. By morning it would be packed with people and the source of all the world’s evils. He knew the thought was true and didn’t know what to do about it. His fingers dragged the match across the black strip and it sparked to life. He lit it and stared at the match until he had to drop it or burn his fingers. 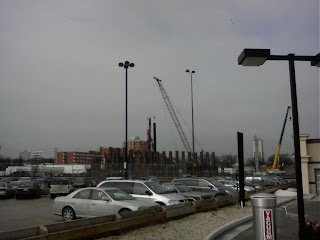 He dashed across the street and slipped in-between the gates. The crane towered twenty feet ahead of him. He jumped up on to the trend and pulled open the door of the cab. Inside was a mess of levers and buttons. Alex slide into the seat and scanned the controls only some of them still had labels. He jammed forward on stick and watched as the boom arm swung forward. Then he pushed the same stick to the right and hit a button labeled release.

The tool on the end swung like a pendulum towards the site office. On queue it released and flew through the walls and destroyed it completely. The night sky was lit up by a pillar of flame that rocketed into the sky from the tanks on the far side of the shack. Inside Alex smiled with glee and lit another smoke.
at 19:14

I enjoyed this story and very much sympathized with the main character -- for almost 2 months builders were working on the road outside my house, drilling loudly at around 7am. Why they thought it was okay to start that early, I don't know. Worst was when they'd do it Sunday mornings!

Fun times ahead at the helm of that crane. The rest of the story is running in my head right now. Thanks.

It's so appropriate that the tanks explode into flames as your character lights up, Cliff. Before you do anything rash, though, let's just agree that in real life, that tool at the end of the cable will fall onto the cab and crush you (I mean, the character) at the controls.

Good story. I can't imagine having to go through that every day, and I'd probably snap like him, too. Or at least fantasize about it heavily...

I feel for the poor fellow! And that would certainly make me start smoking again (or at least give me a great excuse to do so... ahem)

One thing that took me out a bit was "caused his monitor to dance across the CPU" - I'm a bit of a pedant and it just sounds wrong as the CPU is a tiny little thing inside the box that your monitor sits on top of...

@Mazzz_in_Leeds - thanks for the feedback. Constructive feedback is the quickest way to get better.

I tend to think of the who computer case as the CPU. So the word choice just made sense in my mind. I'd considered refering to it as the box but thought people might have pictured sometype of cardboard box on the desk or something.

VERY well written--I could FEEL the frustration and tension!