It is always the roughest when the vacation is drawing to a close and you start to feel the weight of the impending return to work. That is where I am right now I know its just around the corner in fact less then a week away at this point. What is keeping me from going down the road of regret is the simple fact that Yule is just around the corner. Three days til Yule eve, it's my favorite holiday and one of my favorite times of year. Sure it might drive me nuts as we are driven insane by the innane bombardment of Christmas Cheer and the commericalism of the message. But I love it none the less.

The vacations been good for me taking one around this time of year seems to almost be a requirement. So much to do and yet so relaxing at the same time. Let me touch on a bit of what I've been doing these past couple of weeks. I've done a bunch of baking, which I am not finished yet, including Merangies, chocolate chip cookies, Peanut butter cookies, Chocolate chip & nuts. If all goes to plan tomorrow will be mincemeat tarts and more cookies. Along the way I have also been working on a couple of different erotica stories, Risen Steam, and a couple of other short story ideas as well. I've also gotten in a bit of Assassin's Creed 1.

One of several different highlights was this past Tuesday when Neil Gaiman was in town. Back in October there was a contest host by Neil Gaiman among the independent Book sellers to hold the best Graveyard Party. As it turned out Winnipeg was one of two different winners. So our prize was a visit, reading and signing by Neil Gaiman himself. 6 hours on my feet but it was worth it. 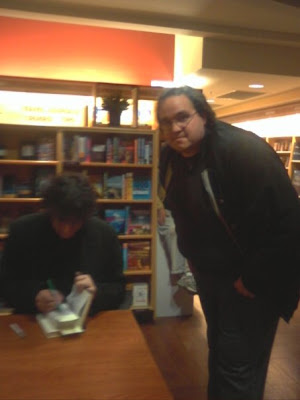