After the Gross-Out the dinner crew ended up in our room sitting around chatting and drinking. Somewhere along the way we did lose Josh rumours of his whereabouts differed widely and included the possibility of being downstairs in the bar or up in his room recovering from the gross out. Again the intimate nature of the convention shined through. The 6 of us were able to relax and talk about pretty much every topic under the sun until the early morning out. Art show director Phy even joined in the fun of the evening. By the time people left it was nearly 3 or 4 in the morning and was a wonderful way to end the day.

Saturday had a bit of a downer feel to it, everyone knew it would kind of be the last day of the convention. A fair number of people had flights to catch early in the day on Sunday. The wife and I slipped out of the hotel to do a quick run home and check on things, and also to grab an extra change of clothes we had packed really light for the convention.

I got back to the hotel to join in briefly on a impromptu post pulse discussion and adventure being led by Tommy Castillo. It was a basic what would you do in this situation. Apparently Rhonda was insistent on heading west to to get to her children. Scott was more then willing to travel with her. While Gavin wanted to get to the ocean and Tommy wanted to head south. I think he was heading home to his post apocalyptic jeep. I didn’t stay with the group long my own use was pretty limited to the time we spent in . Also the panel on Odyssey was about to start.

Tamile, my wife had taken a number of the guests on a bit of a ghost tour of the city. We have a number of haunted locations in the downtown and she knows most of them. Thankfully they made it back in time for the panel since one of her passengers was hosting it.

Sherry an Odyssey grad shared her experience at the well known writing school. Touching on how the classes where formatted, several of the different assignments she received and the work that was done as a group. As someone who already listens to the Odyssey podcast it was a really interesting discussion and I enjoyed the opportunity to hear from a grad first hand. 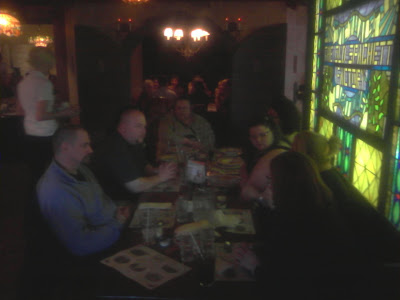 After the discussion was kind of a blur until supper. I had numerous little discussions with a variety of people. Now earlier in the day Sherry, Tamile and I discussed dinner plans. We didn’t want our last dinner as a crew to the disasters our first two dinner attempts had been. This time reservations were made, we were smart, or so we thought. We even made reservations for 10, counting on the fact more people would want to join. What no one counted on was the sheer number of people who wanted to come. It seemed like one of those situations where 1 person would tell someone and they would tell someone and so on and so on. So at one point it seemed like we had about 20 plus people planning on coming along. This would have been great if the restaurant could handle a group that size. Then I would hear some people were not coming and it seemed to go back and forth. In the end a group headed off to a different restaurant, and we had 14 people spread across two tables. Mental note next time reserve a bigger table and avoid all of the problems that go along with making reservations.

At dinner we learn that Nicole had popped the big question to Shad and he said yes. I was discouraged from telling the staff and getting them to sing for the happy couple. In the end dinner was the best one for our little crew of the convention. The food was good, the service was quick, and we didn’t have to wait to be seated. Score one for Winnipeg Dinning. It was at dinner that we got to meet Toni as well an interesting woman who whose clone I happen to know. We ended dinner with a trip to the Basilica a local landmark and cemetery. Nicole video taped a lot of it, but I’m not sure if the video will get posted or what will happen to it. 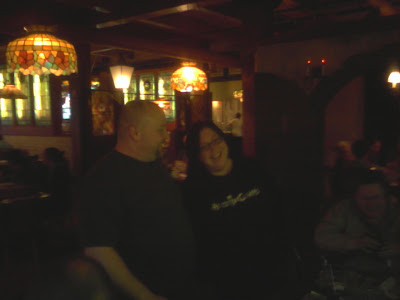 
Once we got back a lot of people got together to listen to read from some of his books. A card was also circulated through the Con as quickly as possible to get as many people as possible to sign it and draw something cute for Nicole and Shad. Mean while Josh and I got together in my room for a few drinks and to talk publishing, writing and the industry. It was a couple of hours well spent in my books and he gave me a lot of really good insight in to what I should be looking at and a few different directions I should be considering. There was also a lot of interesting bits of information I’d never considered before. So a big thanks to Josh for his time. While we were chatting the rest of the crew had gathered in the room had used for his reading and were having there own little party.

By the time we got down there it was wrapping up, so we all headed to Regal Beagle in the lobby. Karaoke was well underway star Scott, Kelly, Rhonda, Tommy, Gavin and others. Kelly was the only one of the group I heard personally, but apparently they all have great voices. Next time you bump in to Tommy ask him to sing you Rainbow Connection, in Kermit’s voice. I didn’t last all that late but apparently the rest of the group closed it out.

Sunday was an odd cross between packing up the convention, saying bye to new friends, and having fun. Half the convention had left by 2 pm to go home. What remained continued on without them as best they could. Conversation took place wherever space could be found and much found and drink was finished in the con-suite. For myself I ended my con in the hot tub with the chair and a couple of other local friends.

It was a great weekend and I have a lot of fond memories from it. I honestly don’t know if it would have been the
at 21:55

Thanks for posting this write-up of the con... I always hate to miss it, and reports like these are the next best thing. Sounds like it was so small to be a rather unique one, where someday you'll look back and say "I was one of the few who was actually there!"

I think you've hit the nail on the head there Mike. It was a unique and we will be able to look back and say I was one of the 60 people there.

The official count I heard from Linda the con chair was 61 memberships sold.