Wow four days after the World Horror Convention and I am still recovering. I should be back to normal just in time for 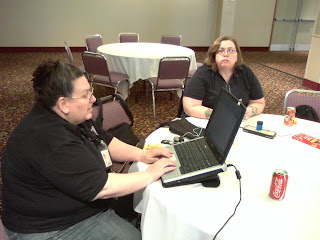 Keycon our local convention which is coming up next weekend. Thankfully after that I have the week off, but let’s talk more about World Horror.

I attended as a favor to the chair of the convention as a volunteer. Honestly I am not a big horror fan in fact slasher type movies just don’t do it for me. What I was interested about the convention is helping a friend and meeting the writers and editors who would be in attendance. As things turned out I got all of that and a whole lot more.

Out weekend start Wednesday night right after work. I headed straight to the hotel to help with some unloading. My wife joined us after work and we visited with people for a couple of hours afterwards. That was where we first met Scott http://www.sgbrowne.com/ the author behind the Zombie story Breathers. It was also the first time I heard about the gross out contest at the convention. Then it was off to the Airport collect Edo Van Belkom www.vanbelkom.com a guest flying in out of Toronto. Unknown to any of us at the time was the fact he would end up playing a much larger role in our convention experience than any of us might have guessed.

The next morning we packed up for the weekend and headed for the hotel in time to enjoy a quick bite to eat and to lend a hand with some last minute set up. Afterwards it was off to the airport to pick up the last of the guests, well known artist Tommy Castillo. If you’re not familiar with his work stop by his website http://www.tommycastillo.net/ it’s likely you will recognize something he’s done.

Then it was time for Opening Ceremonies. I had heard the con was going to be small beforehand but there were maybe 20 people in attendance. The reality that this was going to be a small con really struck home. A lot of people described it as being an intimate convention, which I think was really taking a positive look at the experience. Minutes after opening ceremonies we met Nicole and Shad, Sherry, and Josh the small group of us made dinner plans.

Sherry is a local Winnipeger, Nicole and Shad were a couple who had come up from Detroit and Joshua Gee www.JoshuaGee.com was one of the guests who had traveled up from New York City. We all agreed to meet in the lobby and find somewhere to eat, on the way out of the hotel we were met by Edo and invited him to join us. It only made sense since all of us where heading for his reading in a few hours anyways. The small crew or posse as some would come to call it headed for a nearby restaurant that I had been to many times and knew was good. What I didn’t was that the restaurant had become a teaching school. It took over an hour to get our food and when it did finally come out it came out one or two people at a time. This would be bad dining experience number 1. After least the food was alright in the end. 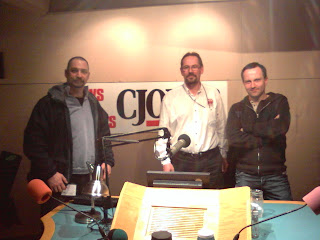 Edo’s reading was our last official event of the evening. He told a lot of good stories, several of which we were hearing for the second time. Over dinner we all share stories so some of Edo’s slipped out early. He didn’t hold back on his experiences as a full time writer, which some authors do. It was the start shit with Edo some good some bad all of it pretty interesting. Tamile had to take Edo and Conrad to a radio interview and the two of them did a great hour long discussion on live radio. I had planned to spend the rest of the night working on my gross out story but the reality is that I stayed up till three in the morning chatting in the con suite.

The next day was a bit of a blur. Tamile had to work in the morning and I ran some errands for the Con with John. Once we got back to the hotel I collected my laptop and set up in the main room to write my piece for the Gross out Contest. Once it was finished I left it with a friend to proof read for me while I went to the pool. Normally I’ll finish something and leave it for a few days to stew in the back of my head before editing. To edit something right after I finish writing it would just be too fresh in my mind.

As a quick aside the pool had a hot tub and waterslide both of which were a heck of a lot of fun. As a big guy I don’t normally get to ride waterslides, so I made the most of it. Again the crew headed out for dinner and this time we decided upon the Elephant and Castle. It would have been a great idea had there not been a hockey game. 30 minute wait time just to sit down. Boston Pizza had a 20 minute wait time. We ended up in a food court eating McDonalds. Winnipeg restaurants didn’t shine on this weekend. 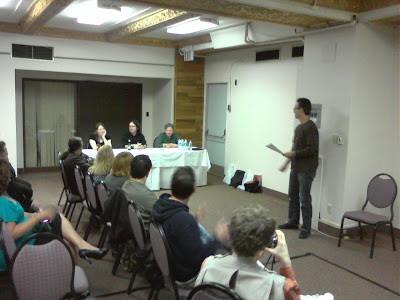 The Gross-Out for me was one of the highlights of the convention. Anyone that entered had to step up and read something they had written before judges and a live audience. The focuses of all of the stories was horror obviously with particular attention being paid to the gross factor. The bar was set pretty high right from the start with Edo reading one of his. Toni read her story inspired by some real life events. Gavin from the Canadian Maritimes read a torture piece he wrote. Then came mine, it was basically my first time reading up in front of a group of 20 some people. I was doing alright up to the point I heard the one minute warning and knew I wouldn’t make it. Suddenly I found myself trying to edit on the fly only to end up losing my place and getting more and more lost. In the end I didn’t finish reading it to my disappointment. Tommy Castillo came after me and awed the audience about an ex-wife and his then unborn son. Nicole closed out the contest with something that was much subtle, but very good. It was some great storytelling and a lot of fun watching the audience groan and grimace. In the end Tommy’s story took the win and was award a one year old gummy haggis.

That brings part one of my World Horror Con experience to a close.

May I steal that picture of the gross out contest? Pretty please? :)

Steal away just link and let me know please so I can link back.