Keycon 26 Review Continued
Hospitality AKA- the 15th Floor:
Right Photo - The Staggering Penguin as seen from the entrance
Left Photo - Carved sign at the entrance of the Sleeping Dragon 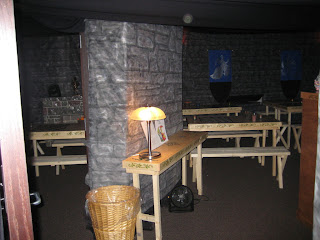 uld be the 15th floor and its assorted Hospitality rooms. This year offered up seven different suites each with a different theme. Most people end up finding one or two that they like early on and spend most of their evenings visiting with friends, drinking and just generally socializing. This year I found myself hanging out more and more in the Sleeping Dragon it is something of a 15th floor gaming area. There I could drink, play games, and socialize what more could you ask for. I also liked Dorm 1701 which held a graduation party Star Fleet Academy style as a room they stayed open the latest for the Sunday night Dead Dog Party. They created a real 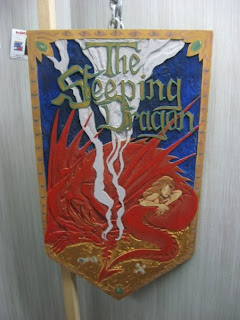 ly interesting look by covering the windows with printed out images on massive sheets of paper.

At opposite ends of the 15th floor we had two very different suites The Staggering Penguin Tavern and the Poisoned Apple. The Penguin was a dimly lit Tavern went heavily for the décor look covering both the walls and the ceiling. While at the opposite end was the Poisoned Apple which was a bright and cheer room, going more for the inviting welcoming look.

Videos & W.A.C.
Also on the 15th floor was the official Video Room showing a wide range of old favourites to movies that have only recently been released on video. It didn’t seem to be running the same all night scheduling that it has for the past few years. I’m not really sure what caused the change but was impressed by the videos they did show. Which included a vampire film entitled Let the Right One In which in the minds of many is the best vampire film of the past year. If you haven’t seen this you really should get out and find a copy. W.A.C. the Winnipeg Anime Club also had it’s room up and running although they were not up and running by 3 o’clock Friday like they have been in the past. I was surprised to not see the DDR out this year it has been a popular past time over the past few years in their room. They also had some of the more valuable prizes in their silent auction including a wide range of Anime and two of the new Nintendo DSi.

Programming:
I attended more in the way of programming items this year then I have traditionally. That has a lot to do with my blossoming interesting in writing and the work I am doing on Carpe Arcanum and other projects. Regardless of the reason I made it out to about 5 or 6 discussion / programming items. The variety of programming was pretty good and the panels I made it out to where very well attended for the most part. It seems more and more people at Keycon are interested in writing this time around as the convention offered up a number of writing focused panels and discussions.

Two observations about programming first the moderators need to moderate. If the discussion is about a certain topic and the author guest is there don’t let the crowd take over the discussion and turn it in to a Q&A session with the author on whatever topic they like. I saw this happen a couple of times at panels over the weekend and the moderator never stepped up to bring things back on track. Second is that there is a fair amount of over lap in panels so on more then one occasion I found myself wanting to be in two places at once.

I haven’t commented on the Read Off since I was involved in setting it up. I would be interested in any feed back on it. So let me know what you thought so we can make it better next year.

Dealers Room:
The Dealers room was moved up to a nice and brightly lit room right beside the restaurant and the cash machine. Hopefully this brought about some more foot traffic for the room. Sadly I found the room didn’t offer much that I hadn’t seen before. The majority of the things I picked up where books that I could have grabbed any day of the week. It would be nice to some new dealers to go along with the traditional ones.

Gaming:
Gaming was another part of the convention that found a new home this year in the large open area in the space beside registration. This was by far one of favourite changes at the convention. While I don’t like to spend a lot of time at cons gaming I do enjoy walking past and checking out the various games. This new space offered my plenty of opportunity to do just that. It also made gaming more apart of the convention and less a separate thing. I think that was a big part of the reason it was as busy as it was all weekend long.

General Impressions:
Over all I think the convention was really good, I had a great time. Events at the convention kept me busy all weekend long. The small problems I have mentioned during the review can be easily over looked and overshadowed by the success and good times. The department heads put on a good show, and the convention went really smoothly for guests and fans alike. One thing about the weekend that really stood out was the number of younger fans in attendance. This increase is something that is important to note for future conventions. It also offers a good sign for the long term success of Keycon as more and more younger fans start attending the convention.
at 14:28