Keycon 26 Review
Well another year has come and gone, so it is with a little bit of sadness that I write this review because I know I won’t be at another one for about 360 days. Like I have done each other time I’ve written a review of Keycon I will run through each of the areas of the convention and touch a little on each of them. Afterwards I will end it with some over all opinions and thoughts about the convention as a whole. If you have a copy of the program book feel free to follow along.

Registration:
We checked in fairly early on Friday before any of the lines arrived so I personally had a pretty good experience when it came to checking in. Others were not so lucky 2 friends who I saw in the line as opening ceremonies began where still in the line as it ended. They had about a 45 minute wait to register and get their badges. I guess it pays to register early and whenever possible check in early as well.
They did do something that I think was a little different this year or at least I don’t recall it from past years. One side of the check in was for registration and the other side was where you could buy T-shirts and they offered a wide range of those. I don’t know how well this worked out since I didn’t buy any personally but anytime I walked past it didn’t have to much of a line up. However the pile of T-shirts did certainly shrink over the course of the convention and I did see a large number of people wearing them. 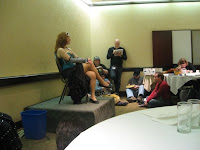 All of guests where very friendly and out going. You could often find most of them floating about on the 15th floor in the evenings with a drink in one and a good conversation around them. The best thing about all of the guests is how approachable each of them where. I spoke with each of them at various times during the con. I will touch on a couple of them one on one because I had more interaction with them, this isn’t to say the others where not as good I just didn’t see them as much.

I spoke with John Kaufmann http://jek2004.com a couple of times during the conventions and he was always pleasant and fun to talk with. In addition he also ran several different art focused panels. Which while I didn’t attend any of them because I have enough trouble drawing stick figures I did hear that they were very well attended.
Kelly Armstrong wa 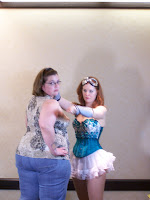 We were the liaison for two guests this year Liana K and Ed the Sock. Both are wonderful guests to work with. Liana ran a number of popular panels during the course of the convention including a how to Pose like a Pin up Model that had a packed room and a professional photographer on hand to take the pictures. She also hosted a number of woman empowering panels that were well received.

Children’s Programming:
For the first time ever we had a room dedicated to Children’s Programming. Parents were of course expected to be there with their little ones, so the room was not a daycare service. What it did was offer things that would be of interest to the kids. It was a good idea that certainly got some positive feedback in the post-con bitch session. Hopefully this bit of programming will continue in the up coming years, because there were a lot new born babies this year and there were also a few pregnant woman about the convention as well.

The Art Show & Auction:
The Art show was tucked away in a bit of an out of the way spot this year. But they certainly did have a decent selection of art available. One thing that struck me as I walked through the art was many of the pieces were smaller low priced items. It seemed like the artist knew their markets because the majority of the smaller pieces seemed to have been sold. The convention also introduced some new types of panels a wire rack design that I thought worked out pretty good. Only problem with them that I saw was that they have hanging space right to the ground so some pieces may end up being hard to see.

The auction seemed to go fairly smoothly despite a couple of problems. I did find it a little hard to tell what pieces were charity pieces and what was going to the artist. Also a number of the pieces were really small making it hard for the runners to show the piece to everyone. The runners also seemed to be very inexperienced and hard to be reminded from time to time that when the bidding gets down to two or three people just to show it to them and not try and show it to the whole room. My final comment with respect to the auction is that if you are a runner and you are planning to bid on a piece don’t run it as well. It really is just bad form. I wouldn’t put any of this on the Art show Director she had several experienced runners pull out at the last minute. In the end the art show was profitable for both the convention and for the artists and that is the important part.

Masquerade:
I’ve seen a few pictures of this post con and it looked like it was a fair small masquerade compared to recent years. Although I really couldn’t say to much about it because I didn’t get to see it. See the Programming Grid list the Children Masquerade as starting at 630 and the Regular Masquerade at 7:00. We didn’t have any interest in see the Children’s Masquerade so we showed up at just after 7 expecting to have just missed the intros and a bit of banter. To our surprise because of lack of entries in the Children’s Masquerade it was decided to start the masquerade at 630. So it was all over when we arrived. I’d love to hear some feed back from the people who took part. 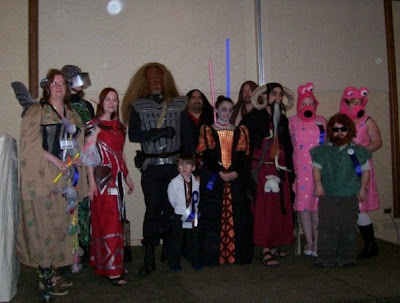